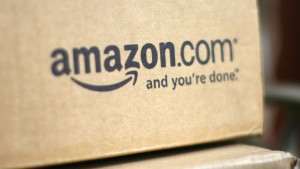 Amazon.com Inc saw its shares soar following the announcement that its sales for the third quarter topped estimates of analysts thanks to the cloud-computing  division that is rapidly growing, a boost from July’s Prime Day event and a careful watch on spending.

A surprising $79 million profit equal to 17 cents per share spurred Amazon shares upward by as much as 13% in Thursday afternoon extended trading, which catapulted Jeff Bezos the CEO into the spot of the third richest person in the U.S.

The earnings for the quarter compared to a $437 million loss equal to 95 cents per share for the same period last year, which signaled a quick change from the drop Amazon took following the poor sales of its smartphone Fire.

While investors were overly happy with the revenue increasing faster during the quarter than the expenses, Amazon was quick to say it would continue making devices that can be used by people to watch videos, shop online and read e-books.

Bezos trumpeted the Fire 7-inch tablet for this holiday season. Amazon is selling its Fire tablet for $50 for one or for $250, you can buy 6.

Brian Olsavsky, the CFO at Amazon.com said the company would make millions more Fire tablets than it had planned initially.

Investors have been regaining confidence in the company as the biggest Internet commerce business in the world expanded its core business and cloud-computing unit without needing to spend a large amount like it has with developing new electronic devices.

Revenue for the quarter was up 23% to over $25.4 billion in comparison to projections by analysts of $24.9 billion. Expense for operations increased by 18%, said the company.

Amazon is showing no signs of a slowdown in consumer spending hurting its business, which is differentiating it from its retail competitors.

The sales event known as Prime Day added 2% to the global revenue growth of the company. The company said they would continue with the event each year.

Bank of Montreal Can Has $11.73 Million Stake in Spring Valley Acquisition Corp.