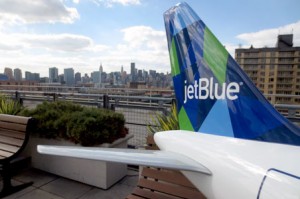 Despite JetBlue losing its bid to acquire Virgin America based in California, the airline is not giving up its battle for the Golden State’s high playing passengers.

On Tuesday, JetBlue announced that it is planning to expand its transcontinental service known as Mint, at major destinations on the West Coast including Seattle, San Francisco, Los Angeles and San Diego.

This news comes a week after Alaska Airlines parent company Alaska Air Group outbid JetBlue for Virgin America at a price of $2.6 billion.

The proposed merger is expected to expand the dominance of Alaska from the region’s Pacific Northwest to the remainder of the West Coast.

To compete with that, JetBlue said passengers on the West coast can opt for its Mint service, which is premium class that includes seats that are extra roomy, early privileges for boarding, free use of WiFi, meals specially prepared and a top of the line entertainment system.

Mint seats have become very popular with entrepreneurs in Silicon Valley, celebrities in Hollywood and other big money spenders of which many are the same passengers who enjoy the high-tech, mood-lit cabins that Virgin America offers it premium customers.

CEO and President of JetBlue Robin Hayes said in a prepared statement that the plan for the airline has called for some time for strategic growth of its Mint service on transcontinental routes and the right time to do that is now to capture the opportunity to bring competition to an area where customers are facing fewer choices.

JetBlue has announced it would expand its Mint service to Seattle, San Diego, Las Vegas and Fort Lauderdale. It will also increase the existing Mint routes from Boston, New York, San Francisco and Los Angeles.

In all, JetBlue will offer 55 daily departures of its Mint service when all new routes are up and running from 2017 to 2018.

At the same time, Richard Branson the billionaire founder of Virgin America suggested that he would put up a fight if a decision is made by Alaska to absorb the staff and planes of Virgin America and discontinue its brand.