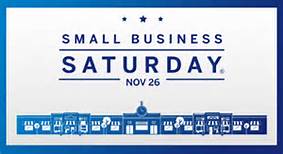 The better known of the two may be Black Friday due to its huge deals but Small Business Saturday is a shopping day that puts its emphasis on community.

Sponsored by American Express, Small Business Saturday takes place on the Saturday following Thanksgiving and focuses on supporting the small, local businesses in communities around the country.

Small businesses that have been regular participants in the event said they have seen sales as well as foot traffic increase every year.

Many small retailers around the country expect between 40% and 50% of their annual sales to come during the final quarter of the year, which includes the annual holiday shopping season.

The movement thanks to American Express is growing quickly. American Express said that sales last year for the event topped $16.2 billion, which was up from the 2014 amount of $14.5 billion. Last year over 95 million customers shopped at local stores, restaurants and more.

No dollar projections for sales this year have been released, but research leading up to Saturday’s event from the National Federation of Independent Business and American Express showed that 76% of consumers who are aware of the event were planning to support one or more of their local businesses.

Forty-eight percent said they were planning to spend more during the event than what they spend a year ago.

One local jewelry storeowner said there has been a much larger push in her community to support smaller local businesses that are part of the community.

Many small local businesses give back to the community during the course of the year through sponsoring local athletic teams, or donating for other local causes.

That in turn makes it that much more important for the members of the local community to reciprocate during Small Business Saturday by supporting the store, restaurant and  all small businesses in their area.

The large box-stores and department store chains have sprouted up across the U.S. in both large cities and smaller metropolitan areas.

Their ability to buy low and sell cheap has hurt the local businessperson. Small local stores do not possess the buying power of the large national chains making it hard to compete with similar prices.

Often times the prices paid on Main Street USA are higher than at places such as Walmart, but one must remember by buying locally, the money is remaining in the local community and will help the local economy.