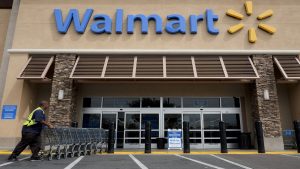 Shares of Walmart Stores increased sharply as the giant in retail posted profit that top Wall Street expectations and announced a strong move up in revenue.

Walmart Stores on Thursday posted a surprise growth in revenue during its first quarter and offered an outlook that was upbeat for its second quarter, which underscored the strong grocery business of the company that could help to shield it somewhat from the troubled retail environment.

Walmart shares were up 9.2% in trading before the bell on Thursday and have increased by 3% in 2016 as of the close of business on Wednesday.

The company, based in Bentonville, Arkansas has invested heavily to get its customers back into its stores. It worked to stock stores better, improve efficiency and to increase pay of its employees.

However, Walmart warned that the efforts would dig into profits during the current fiscal year. That was the case, as profit was down 7.8% during the just ended quarter, but still was able to top expectations.

The results from Walmart stand out from a number of retailers that had disappointing beginnings to 2016. On Wednesday, rival Target Corp reported that its customers spent less during the quarter with its CEO saying the consumer environment continues to increase in volatility.

Soft results at department stores such as Nordstrom and Macy’s help to illustrate the shift by shoppers away from the typical brick and mortar locations and sparked sales drops across the entire retail sector.

Walmart receives over half its total revenue from its grocery business. Wall Street said that could help shield it from some pressures that retailers at brick and mortar locations are feeling, as shopping for food has had a much slower shift toward online.

Retailers have closed weaker locations as well as invested in e-commerce as the consumer has shifted to more shopping online and to the fast fashion stores.

However, the moves have not done enough to counter the weaker demand.

Nevertheless, TJX Cos the chain of off-price stores and home improvement chains such as Home Depot and Lowe’s have reported strong traffic as well as spending across their locations, which suggests the consumer is willing to spend his or her money but is more selective over where its spent.

During the first quarter, Walmart sales in existing stores in the U.S. were up 1%, which marked the seventh consecutive quarter with an increase following extended declines.