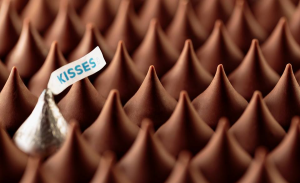 Hershey announced that Michele Buck an 11-year veteran with the company would be the next CEO and president of the chocolate maker, an appointment during a time when large food manufacturers are being challenged by startups that are much smaller.

Buck is currently the company’s COO and will officially start as the top executive of the company March 1. She will succeed John Bilbrey who announced in October that he intended to retire in 2017 from the company.

The maker of its namesake chocolate, Twizzlers and Reese’s said that the compensation agreements for both the outgoing Bilbrey and incoming Buck are not yet determined. Bilbrey has agreed to remain as the non-executive chairman of the board.

Since joining the company during 2015, Buck has controlled a few strategies of note including Hershey’s Krave beef jerky and barkThins acquisitions. Buck has also led the company’s expanding core confection portfolio.

The newly named CEO is 55 and was chosen to be Hershey’s new chief executive after Hershey announced that it reviewed candidates who were within the company along with external ones.

Like most of the large food and beverage makers in the U.S., Hershey has faced sales challenges as it continues to confront the changing preferences of consumers that included moving from large established brands to upstart rivals. That trend has led to deal making such as Hershey’s recent acquisitions.

Still, growth in sales remains challenging at best. Hershey’s overall sales dropped during 2015 to just over $7.39 billion from sales in 2014 of $7.43 billion.

Hershey predicts a slight increase in sales for 2016 of 1%.

Hershey found it was a target of a takeover earlier this year by Mondelez a snack maker giant. That deal died however after Mondelez announced that there would be no way the two could reach an agreement.

The potential hostile takeover of $23 billion was blocked by Hershey’s Milton Hershey Trust, which is in control of 80% of the votes of shareholders at the company.

The Buck appointment is notable for more than one reason. With $7.4 billion in revenue annually, Buck will become one of only 25 women to be in charge of a Fortune 500 business.

On the most up to date list, Hershey was No. 362. The appointment of Buck adds another female to the expanding list of women executives that run Big Food businesses. Others executives of note on that particular list include Indra Nooyi at PepsiCo, Denise Morrison at Campbell’s Soup and Irene Rosenfeld at Mondelez.

Bank of Montreal Can Sells 53,873 Shares of Seagen Inc.

Genuine Parts Shares Sold by Bank of Montreal Can

Bank of Montreal Can Acquires 2,343 Shares of Bandwidth Inc.