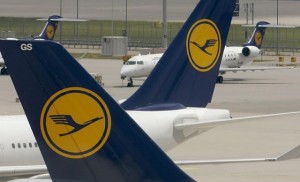 Lufthansa the German airline had to cancel 290 of its flights on Friday, which ground more than 37,500 passengers due to a cabin crew strike in a long running disagreement over the savings the airline is aiming for to fend off its low-cost competition.

Of the flights cancelled, 23 were service that were inter-continental said Lufthansa in a prepared statement.

The union of flight attendants or UFO initial stoppage started Friday at 1300 GMT and affected the flights to and from airports in Dusseldorf and Frankfurt.

The unions announced as well that a second and much longer walkout would be on Saturday in an effort to pressure management.

The stoppage on Saturday would once again focus on Dusseldorf and Frankfurt and start at 0500 GMT and go through until 2200 GMT.

The subsidiaries of the group Germanwings, Lufthansa CityLine, Eurowings, Austria Airlines, SWISS, Brussels Airlines and Air Dolomiti are not targeted in this action.

Lufthansa announced that it regrets the actions taken by the union and apologized to its passengers saying short notice from the striking personnel made it extremely difficult to inform passengers in time so they could make alternative arrangement for travel.

The walkouts by UFO will be staggered and target different airports during the upcoming seven days, with a repeat of stoppages planned on Saturday.

However, the Munich hub of Lufthansa will not be affected all weekend, given the school holidays are still on.

In addition, there will be no industrial action planned on Sunday since the majority of people that travel that day will be doing so in a private type capacity.

UFO announced Thursday that its pending industrial action had become unavoidable after the airlines management failed to provide an improved offer in its long running disputes over increases in pay and its early retirement provision.

Lufthansa said it provisionally had booked 2,500 rooms at hotels in the Frankfurt area for passengers that were grounded due to the strikes.