Camera Zooms In and Can Recognize Faces 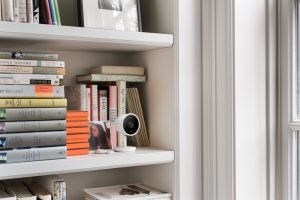 Nest, the camera maker, has unveiled its Nest Cam IQ. The camera, at a price tag of just $299, is able to detect when someone walks, zooms in on that person and follows them for a clear shot.

It can send an alert to a smartphone with a photo of the face of the person it followed. The indoor camera includes a 4K sensor, a digital 12-times zoom as well as face detection.

It also will have the ability have a two-way simultaneous conversation on the speaker. The IQ was redesigned so that it looks like the Net’s all-white sleek outdoor camera but with another stand and a weighted base.

This represents the first new product to come from the Alphabet division since last year when the outdoor version was unveiled.

The camera’s launch ends a quiet period at Nest, which has had problems with turnover, rumors employees are dissatisfied and a recall the smoke alarm product it has, the Nest Protect.

Founded by Tony Fadell a former engineer with Apple, Nest was a darling in the tech industry after it released during 2011 a smart thermostat.

In 2014, Google acquired Nest at a price of $3.2 billion. Later the same year, Nest bought Dropcam a startup specializing in connected cameras at $555 million.

Greg Duffy the CEO at Dropcam said later that he regretted his decision to sell to Google, citing issues with the management style of Fadell. In 2016, Fadell resigned at Nest.

This new IQ camera is not yet the radical new smart product many watchers of Nest had been hoping for, but is a substantial upgrade.

The camera’s sensor is 8-megapixel 4K though it does not upload full 4K videos, as that would be almost impossible with the majority of current connections to Internet.

Nest is also using the same face detection technology from Google that is behind Google Photos, but has taken precautions to minimize any weird implications. It runs the algorithms completely on its servers and will not exchange information of any kind with Google.

Face libraries will not be shared by the company between Nest users. That means if the houseguest is known by the camera as Jason, it will not recognize him using his name if he walks in the camera range of someone else’s Nest Cam IQ.