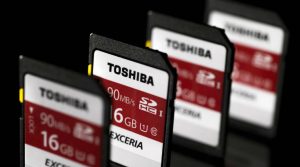 Amazon and Apple are said to be working with Foxconn in an attempt to secure part of the semiconductor business of Toshiba, which is for sale.

Hon Hai, known also as Foxconn, offered over 2 trillion yen equal to $18.2 billion for the semiconductor business. According to the chairman of Foxconn Terry Gou, the bid has the financial backing of both Amazon and Apple though the specific details about financing of the deal were not disclosed.

Gou said that both Amazon and Apple were offering money, but he could not comment on the amount of funds that each of the companies was bringing to the table.

It is unclear at this time if the deal is based upon financing as an investor, or if Apple and Amazon want to help out for a slice of the unit of Toshiba or its assets.

However, both tech companies are important customers for Foxconn for device parts and components for products such as the iPhone of Apple and the Amazon Kindle as well as the Amazon Echo.

Foxconn acquired Sharp in 2016 for $3.5 billion and is contributing to this bid as well. Toshiba’s U.S. unit for nuclear power known as Westinghouse Electric in March filed bankruptcy as delayed projects of nuclear plants caused it to start hemorrhaging money.

Through filing Chapter 11, Toshiba can cuts losses but has charges of close to $9 million, as well as $6.3 billion of losses.

The huge strain financially caused by the problems of the nuclear projects forced Toshiba into selling its business for its flash memory chip NAND, which provides the chips that are suitable for cloud computing and smartphones both of which might be of big interest to both Apple and Amazon.

The problems led to Shigenori Shiga the chairman of Toshiba resigning in February.

Sources close to the situation now say that despite the cash sitting on the table, that Foxconn is not one of the favored bidders to the company’s links to China.

Apparently the government of Japan is worried that should the bid by Foxconn be accepted that key technology would leave and thus the acquisition might be stalled by regulators from the Japanese government.

However, Foxconn said it was confident the company would secure the acquisition. With Amazon and Apple potentially being backers, the government might have to reconsider the stance it has related to the deal.