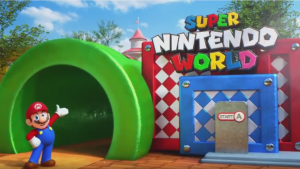 The construction has officially started for the Super Nintendo World theme park and as a way to celebrate, Universal Studios Japan released a trailer for the theme park that has been much anticipated in the city of Osaka.

The preview hints at the design of the park and its possible attractions. The mushroom kingdom that is depicted during the trailer is full of moving platforms, castles, giant mushroom pads, piranha plants and much more.

Universal Studio has confirmed the park will have a Mario Kart ride. This is not a big surprise as previously released patent documents hinted at the ride being on a rail with one rider controlling the drift of the vehicle and the other rider focusing in on the weapons and power-ups.

However, the Mario Kart ride was not featured in the trailer so it is still not completely clear what the ride will ultimately look like or the tracks from the series that will be incorporated into the park.

The trailer did not reveal all that much in detail, except that Mario along with his crew that always accompanies him will be the headliners of the park, but then again everyone knew that from the start.

Bowser’s and Princess Peach’s castles were also featured and will likely become part of a frontage for a shop, ride or possibly both.

While this theme park is named Super Nintendo World instead of being Super Mario World, other Nintendo franchises that are popular such as Metroid, Zelda or Kirby did not appear in the just released trailer.

It is not clear therefore if they will have rides of their own or any other attractions. However it is very likely they will, being that they are important characters within the Nintendo brand.

The park will open its doors and gates sometime prior to the start of the 2020 Tokyo Olympics. However, it is not clear if any more details will be shared by Universal Studios Japan about how the construction is moving along.

What is also equally unclear is if the other planned locations in Orlando and Hollywood would follow the same park template as the Osaka Park, but it seems likely that would be the case.

However, for now, Nintendo fans will have to be content with the trailer although it players should remember that a new title for Super Mario 3D will be on Switch later in 2017 named Super Mario Odyssey.

More details of that game will be shared by Nintendo once E3 starts next week.