BP Shuts Down Production In North Sea As Precaution (NYSE:BP) 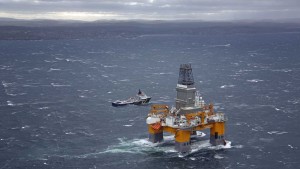 BP has ordered more than 230 staff to leave the Valhall field in Norwegian waters and has shut down production in the area as a precaution. At the nearby Ekofisk field, ConocoPhillips halted output and evacuated workers by helicopter. During a severe storm, a huge barge broke its moorings and threatened to crash into the platforms in the area.

The decision to halt output from the fields reduced the likelihood of any explosion or spill if the barge hit any of the platforms. The barge that broke free is owned by Norway’s Eide Marine. Later in the day, it was reported that the barge had safely drifted past Valhall. The vessel missed the BP platform by two kilometers. according to a spokeswoman for the Rescue Coordination Centre for southern Norway. There are reportedly no other installations between the barge and the coast of Norway.

The company said that some of the workers were taken to nearby platforms so that they can get production back up quickly when the situation improves. It is expected to take around 24 hours to get oil production back up and running. The North Sea drilling platforms produce around 50,000 barrels of oil a day. It is too early to say whether the halted output from Valhall and Ekofisk would have an impact on oil prices.

The storm also caused one death and multiple injuries on the Troll field off the coast of Norway, which is managed by Statoil. The man died after a 60ft wave hit the accommodation block on a platform in the Troll field. Three people were airlifted ashore by Norwegian rescuers, but one, said to be a Norwegian man in his fifties, died from his injuries.

$80.20 Million in Sales Expected for Atea Pharmaceuticals, Inc. This Quarter