Toshiba Has $6.6 Billion of Market Value Wiped Away by Investors 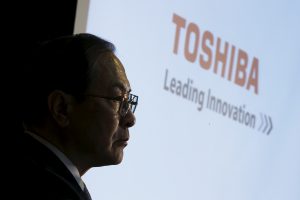 Toshiba has dreamed of becoming a leader in the nuclear energy industry. Those dreams are now only big nightmare’s for the Japanese based company.

Jittery investors have wiped off more than $6.6 billion of the market value of the company after it released a warning of extremely large losses linked to its acquisition during 2015 of a nuclear construction business in the United States.

Shares of the Japanese company plunged 17% more during Thursday trading. Losses during the last three trading days now have reached 42%, driven by the most part by downgrades of credit ratings by S&P Global Ratings and Moody’s.

The hemorrhaging began after Toshiba released a warning that it would post losses in the billions of dollars from the takeover of a nuclear construction operation in the U.S.

Satoshi Tsunakawa the company’s CEO did not release any specific figure of what losses were expected to be. He only said that Toshiba was still attempting to determine what those exact numbers will be.

Toshiba’s subsidiary in the U.S. Westinghouse acquired CB&I Stone and Webster a construction business that specializes in building nuclear facilities. Westinghouse purchased the business from Chicago Bridge and Iron during late 2015.

The deal had been expected to help Westinghouse finish reactor projects located in both South Carolina and Georgia.

However, on Tuesday Toshiba admitted that the costs for the two projects in the U.S. would far surpass its original estimates.

In addition, the company said that its initial value of the company acquired in 2015 may have been substantially overvalued.

Currently Toshiba is manufacturing consumer electronics, medical equipment and other products. It turned to the industry nuclear plant construction as a way to help secure its own recovery following the huge accounting scandal of last year that was more than $1.2 billion.

However, it appears now that the move made by one of the most storied corporations in Japan might have amounted to just another stumble.

CEO Tsunakawa said that the positioning of the Westinghouse nuclear plant could be revised if needed over the near future.

Westinghouse has expanded its product line over the years as a way not to be so dependent upon its consumer electronics due to the ever-changing landscape of that product line.