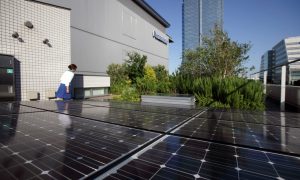 Panasonic Corp together with Tesla Motors announced on December 27 that they have reached an agreement to begin production of photovoltaic cells and modules in a Buffalo, New York factory.

The two companies released a joint statement that said the two were planning to begin production of the PV modules in 2017 during the summer and by 2019 increase to a gigawatt of module production.

These PV cells and modules are high-efficiency and will be used for producing solar panels for non-solar roof products said the joint statement released by both.

When production begins of solar roofs, Tesla will incorporate cells from Panasonic into the many different types of solar glass roofs that Tesla is to manufacture added the statement.

Panasonic Corp said it would be investing over 30 billion yen equal to approximately $256 million in the Tesla Motors facility that will make PV cells as well as modules. This deepens the partnership between the two companies.

Panasonic, based in Japan, which has pulled back from making consumer electronics that are low margin to focus on its automotive components as well as other businesses that targets corporate clients, is making its investment into the factory of Tesla in Buffalo.

The electric carmaker based in the U.S. had made a commitment for the long term with Panasonic as part of this deal along with providing the factory space and the infrastructure.

The plan is just one part of its solar partnership that both of the companies announced for the first time during October of this year but did not speak of any specifics related to investment amounts.

Tesla will work on an exclusive basis with Panasonic, which has been an longtime partner with the company, to supply batteries for its new Model 3 electric vehicles, the first mass market vehicle for the company.

Panasonic is the exclusive supplier of the batteries for the Tesla Model X and Model S vehicles.

As part of this new agreement, Panasonic will pay the capital costs in the factory in Buffalo and Tesla will make a purchase commitment for the long term of Panasonic products said the joint statement released by the two companies.

This new collaboration extends the already established business relationship between Panasonic and Tesla, which includes production of grid storage battery cells and the electric vehicles at the Tesla Nevada Gigafactory.

Head-To-Head Analysis: UpHealth vs. The Competition