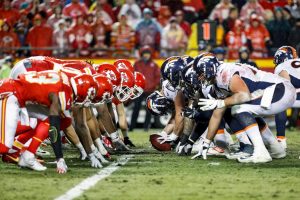 It’s that time of the year when no NFL team feels over-matched by an opponent.

It’s that time of the year when head coaches feel they have the most talented roster in the league.

It’s that time of the year when each front office expects to make the playoffs.

OTAs are nearly complete, now we must decipher the recent developments as we’re a little over a month a way from the start of training camp. The time for evaluating is over, now let’s see which teams are on top of the NFL Power Rankings:

The success of the Philadelphia Eagles defending their Super Bowl crown is dependent upon the health of Carson Wentz and how many games he’ll miss before returning to action. The schedule seems to be in their favor as the Eagles play only one divisional game before Week 10, and that gives them ample time to secure a sizable lead in the standings. The move that solidifies the Eagles’ place on top of the NFL Power Rankings was rebuilding the defensive front seven with younger and more athletic players.

Team Turmoil is still the second-best team in the NFL Power Rankings, but the gap has been definitely closed on the New England Patriots stranglehold of appearing in the conference championship game. The competitive imbalance of the AFC East affords the Pats an opportunity to win six games each season as they dominant their division counterparts, Miami Dolphins, New York Jets and Buffalo Bills. If this continues, then the league’s current dynasty won’t be going a way any time soon. It won’t matter if Tom Brady and Bill Belichick hardly speak to one another because their partnership will continue to keep the Patriots in contention for a Super Bowl berth.

After spending most of the decade in mediocrity, the Jacksonville Jaguars have convinced the Walterfootball.com NFL Power Rankings that they have a young nucleus that’s ready to contend after last season’s surprising results in the playoffs. You have to love their defense to lead them once again, especially if they can stay healthy for another year. It’s a scary unit for any opponent as they shorten the field for their offense to score points off of turnovers generated. The Jags have a few weaknesses, and the majority of them lie on the offensive side of the ball. If Blake Bortles continues to grow as a starting quarterback, then the Jaguars have an excellent shot of dethroning the Patriots and becoming the AFC representative in the Super Bowl.

The Minnesota Vikings accomplished a tough task of improving their offense without losing one of their top playmakers because a change took place at the quarterback position. It’s a hefty investment ($84 million) in Kirk Cousins who hasn’t been all that successful in his playoff appearances. However, the addition of him seems to bolster an already potent offensive unit, but don’t sleep on the fact that the Vikings added key personnel (CB Mike Hughes and DE Jalyn Homes to a defense that led the NFL in fewest points allowed last season. Over-and-over again, it seems like Minnesota will be in a “Super Bowl or Bust” mentality for the 2018 season.

The Tampa Bay Buccaneers play in one of the toughest divisions in the NFL as team management is confident they have made the necessary player acquisitions to move out of the NFL South cellar. The window for making the playoffs has been significantly opened for the Buccaneers, especially after acquiring Jason Pierre-Paul, Vinny Curry and Mitch Unrein to bolster a weak pass rush. Too many times, the defense failed to contain Matt Ryan, Drew Brees and Cam Newton, who the Bucs meet twice a season. Leads against this trio are rarely safe, but your chances to win the game decreases if you cannot generate a consistent pass rush. The Buccaneers are confident this unit will exceed the paltry 22 sacks gained last season.