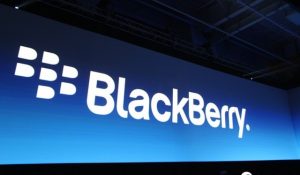 The former king of mobile, whose QWERTY keyboard handsets were at one time so popular with celebrities, traders and politicians that they were given the nickname CrackBerries, now outsources its namesake phones’ manufacturing.

Blackberry realized it could not win if it battled with Apple and the many companies making mobile phones that run on Android.

Therefore, the company, under the tutelage of CEO John Chen, successfully transitioned to connected devices and software. Software and services represent close to 60% of the overall sales at BlackBerry.

The company has done very well with telematics, running software for vehicles. GM, Chrysler, Ford, Fiat, Toyota and Honda are customers. The focus on this might by the biggest reason why stock at BlackBerry has rallied tremendously this week.

Shares moved above the $10 mark for the first time in the past two years.

A key business for BlackBerry is also Cybersecurity as it always has been.

A great reputation for strong security is the most important reason why Wall Street firms and governments stayed with BlackBerry even though consumers shifted to the touchscreen smartphones.

Security once again is back on the minds of investors following the ransomware WannaCry attacks that started last week.

Shares of many cybersecurity stocks as well as ETFs that own them surged since the start of the WannaCry attacks that infect PCs as well as other devices.

BlackBerry has a share of the cybersecurity market as well. It reminded customers and likely investors as well of the ability it has to minimize damage from attacks such as WannaCry.

The company this week on its corporate blog said that it had the tools that businesses need to spot missing patches that allow viruses as well as other forms of malware through.

BlackBerry wrote that the WannaCry attack was just a tiny part of what is out there that can disable and destroy systems and the attacks continue increasing in frequency and size that causes billions in damages to businesses, government and the society in general.

As the shift toward the Internet of Things grows, these attacks will just become worse and threaten not only our security and privacy but personal safety added the company, said the blog post.

It all sounds quite scary, but it is also good for business at BlackBerry. Chen in March told investors that BlackBerry returned this year to the black, and expects to post a profit for the year following a number of losses.