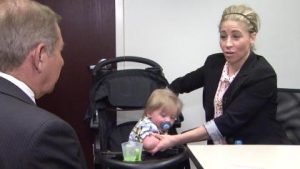 A pair of flight attendants has filed a discrimination complaint against air carrier Frontier Airlines after the two said the airline refused to allow them to breast feed while at work.

A law firm and the American Civil Liberties Union or ACLU filed the discrimination charges on Tuesday with the U.S. Equal Employment Opportunity Commission.

Both federal as well as state laws require that employers provide accommodations to mothers for breast-feeding and Frontier has not done that, said Sara Neel a staff attorney for the ACLU.

She added that often times flight attendants will work long shifts, sometimes between 10 and 12 hours in length and throughout that time if they are breast-feeding they will need to pump breast milk during work.

Stacy Rewitzer, one of the two attendants filing the complaints against Frontier, has worked with the airline since May of 2006 and became pregnant back in August of 2015.

According to the complaint filed on Tuesday, Rewitzer was diagnosed with a high risk pregnancy and was required to stop working. She was able to leave due to the Family and Medical Leave Act.

However, Rewitzer said she approached the airline and asked them to accommodate her needs for breast-feeding with a private, sanitary location so she could breast feed each two to three hours for a period of 30 minutes.

The complaint says Rewitzer said the airline told her it did not have any place for her to breast feed.

Court documents show that Rewitzer says that in the past employees who were breast-feeding could pump their milk in bathrooms, but they are no longer allowed to do that.

Rewitzer said at that time she requested ground work as a temporary assignment rather than flying and she said Frontier denied her request.

According to the complaint filed on Tuesday, Rewitzer alleges that she was sent an email from a Frontier manager that said the airline could not offer any accommodations to its nursing flight attendants.

Rewitzer said the decision by the airline made her choose between her newborn and her job. Since the airline did not accommodate her request she took a non-paid medical leave.

Rewitzer has not received a paycheck since August of 2016 and said there has been a great deal of financial stress for her, her family as well as both physical and emotional stress.