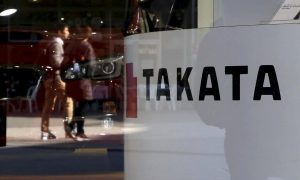 Takata is narrowing down a buyer from the United States to help it get through its huge recall crisis with airbags.

The troubled firm, based in Japan, established an independent committee that recommended the takeover bid of Key Safety Systems based in Detroit, Takata said via a prepared statement.

However, the airbag maker said that a final decision had not been made. Autoliv was another top bidder based in Sweden, but its bid was rejected because of concerns over antitrust problems.

Key Safety Systems did not respond immediately to requests for a comment. U.S. based Key Safety Systems is owned by Ningbo Joyson Electronics based in China and is the world’s fourth biggest maker of airbags. Acquiring Takata would move the company into the second place in size.

Takata is going through the largest ever recall of airbags in the history of the industry, affecting tens of millions of auto. The airbags of the company exploded and sent pieces of shrapnel into both drivers as well as passengers, with 11 confirmed deaths in the United States and others across the globe.

The recalls began during 2008, and are likely not to end until sometime during 2023.

The recall pushed Takata near bankruptcy. Last month, Takata filed a guilty plea to criminal charges and will pay a fine of $1 billion.

Most of that money is destined for automakers that purchased airbags from Takata and have paid to have them repaired.

A deal that includes Key Safety would give support to Takata as it along with automakers that it supplied the airbags to, take on the enormous recall of vehicles worldwide.

The scandal over the airbag has also nearly ruined the reputation of the company and has sent its shares plummeting in Japan.

On Monday, that crash continued with shares of Takata plummeting over 19% in the Tokyo exchange.

Investors became very alarmed by some reports that companies making bids for the firm in Japan want to take the process of restructuring through the court system.

The massive recall will end up costing the firm billions of dollars and it will take years for its reputation to be repaired that is why it is important that another company acquires Takata as soon as possible as a well to rebuild customer as well as consumer confidence.