Ivanka Trump Has Scarves Recalled Due to Risk of Burning 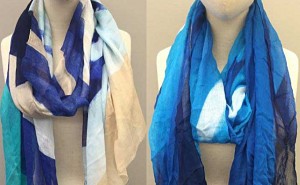 Donald Trump has a new connection with China that could be considered quite embarrassing.

Close to 20,000 scarves that were manufactured in China for the fashion line of Ivanka Trump, Donald’s daughter, have been recalled due to posing a burn risk said the Consumer Product Safety Commission in the U.S.

Consumers should stop using the scarves made of rayon immediately, said the agency. The scarves recalled have two styles. Customers are requested to return the scarves to the place they were purchased for a complete refund, advised the CPSC.

Although there have been no injuries to date reported in relation to these scarves, they have been recalled due to them failing to meet the flammability standards set by the federal government.

Donald Trump has trade as one of his key themes in his Republican Presidential nomination campaign. He has slammed a number of companies based in the United States for manufacturing their products in other countries.

However, many products in his and his daughter’s fashion collections – which include Donald J. Trump ties and suits, are made outside the U.S. in countries such as China.

The recalled scarves from the Ivanka Trump collections were sold between October of 2014 and January of 2015 at stores such as Lord & Taylor and Century 21, said the CPSC, as well as online at loehmanns.com and amazon.com.

Ivanka Trumps representative did not return messages for a comment late Wednesday.

However, some news outlets cited an Ivanka Trump Collection statement that said the company was disappointed to hear of the need for its licensed partner Global Brands Group to recall two scarf styles, but the company is relieved that the immediate action was being taken.

A search shows that Global Brands Group has its headquarters in Hong Kong. It did not respond to messages requesting comments Thursday.

Donald Trump in the past has acknowledged that a certain number of his products are made in China.

He said he talked about his ties during his speeches and has said on a number of occasions they are manufactured in China.