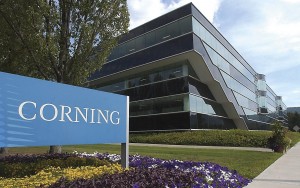 Corning Inc.’s Gorilla Glass, commonly used for the screens on mobile phones, is having its use expanded by the company. The thin, lightweight glass could soon be used on cars across the nation. Car makers are interested in using an automotive version of Gorilla Glass to reduce the weight of their vehicles and improve fuel economy.

Gorilla Glass has been used by the consumer electronics industry since 2007. Corning says that the new automotive grade Gorilla Glass meets U.S. safety standards and has been tested by automakers on rough roads and in wind tunnels. Last year, BMW AG became the first to use Gorilla Glass in its vehicles, using the material on an interior panel in the i8 hybrid sports car.

Ford and Corning began working together on an automotive glass in 2012. Ford Motor Co. is planning to use the new Gorilla Glass for the windshield and rear window in the new Ford GT sports car. The GT’s windshield will be a hybrid, using an annealed glass outer layer, plastic in the middle, and an inner layer made of chemically-strengthened, automotive grade Gorilla Glass. Using Gorilla Glass will make the windshield 32 percent lighter, according to a statement from Ford. The GT will also have an engine cover made of the material.

Corning says it is working on alternate ways of designing Gorilla Glass for use throughout the vehicle. The wider adoption of Gorilla Glass could prove expensive to automakers, costing $2 to $4 more per pound of weight saved than traditional glass. It remains to be seen whether the investment in the new material will be worth the expense.