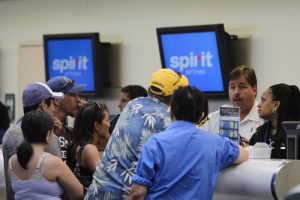 Hundreds of passengers were stranded in the terminal late Monday. The chaos caused by the cancellations is just the latest in a number of incidents involving customer frustration of high-profile proportion, airlines have been facing.

On Monday night, the Sheriff’s Office in Broward County, Florida said close to 500 people had jammed into the terminal where Spirit Airlines has its gates at the Fort Lauderdale International Airport.

The crowd was caused following the cancellation of Spirit flights due to no pilots being available to fly the planes. Deputies could be seen breaking up altercations and grappling with upset passengers in video that someone posted on Internet.

The discount airline said pilots were refusing to pick up their flying assignments. Spirit said that was a concerted plot and illegal way for its pilots association to place pressure on the airlines during negotiations involving contracts.

Spirit filed a lawsuit after canceling over 300 flights both in the U.S. and internationally over the last week due to actions taken by the union. Thirty-six other flights were cancelled on Tuesday.

A temporary restraining order was issued by a Federal District Judge against the pilots union on Tuesday, ordering member pilots to not take part in any slowdown or boycotts, saying that violated federal law.

Paul Berry a spokesperson for Spirit released a statement that apologized to passengers and said the airline was saddened and shocked by the melee that took place in Fort Lauderdale.

The statement said the airline believed the problem resulted due to intimidation tactics used by a small number of pilots that affected the behavior of a larger number.

The union denied that accusation but did say that its members would obey the order handed down by the judge with a goal of helping the airline resume its normal operations.

One airline analyst said not many pilots are needed to call in sick or refuse to accept an extra shift for any airline including Spirit to have to start cancelling a number of flights.

Airlines do not have many reserve pilots that are on call and those they have must be located in the correct place to step up and take over.