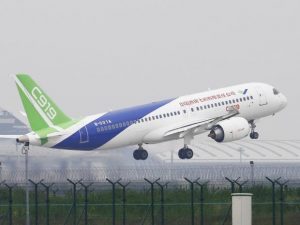 China’s C919 passenger aircraft dogged by long delays has finally completed its maiden flight. A major step for the Beijing government as it attempts to increase its profile for global aviation and boost at-home high-tech manufacturing.

Under an overcast sky, the aircraft with its C919 on its tail made touchdown at the international airport in Shanghai following a flight of 80 minutes. On hand to give the aircraft an enthusiastic cheer were thousands of aviation workers and dignitaries amongst others.

The jet symbolizes the ambitions China has to move into the world’s jet market that is estimated to be worth over $2 trillion during the upcoming two decades. It also backs up the government’s broader plan of Made in China 2025 to spur on products that are home made from robots to medicines.

The hope for China is to compete with U.S. based Boeing and Europe based Airbus as those two are far and away the leaders in sales, tech know-how and orders on the books.

The test flight for the C919 was delayed a minimum of two times dating back to 2014 because of production issues. It might need to carry out tests for years to be certified in China along with Europe and the United States.

The C991 on Friday flew over the Yangtze River Delta and returned south on the China coast before landing in Shanghai.

State media released a statement that said the plane few at approximately 3,000 meters with speeds between 290 and 300 kilometers per hour or 180 to 186 miles per hour.

The plane had five pilots and engineers of which all wore jump suits that were bright orange. They were all given a round of applause upon disembarking. The plane will have a capacity of between 158 and 168 passengers but did not have seats installed on this flight.

A letter that the ministerial cabinet released was read following the landing of the aircraft that said the flight was successful and marked a big breakthrough and milestone for the passenger jet industry in China.

The C919 was manufactured by Commercial Aircraft Corporation of China which is state-owned. COMCA uses overseas technology received from firms such as Safran in France and Honeywell, General Electric, and United Technologies in the U.S.

China Eastern Airlines will be the first customer for the new aircraft, which COMAC has said has 570 orders across 23 clients.