Snapchat: CEO Did Not Label India as Being Poor 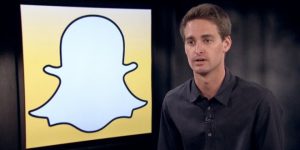 Anger in India has boiled over amongst users of social media following allegations by an ex-employee that its Snapchat’s current CEO once called India a poor country that was not a priority for the popular app. Snapchat vehemently denies the allegations.

The claims became public last week when documents from a lawsuit were opened to the public. An ex-employee filed the lawsuit against the parent company of Snapchat, Snap.

The former employee, Anthony Pompliano worked just three weeks for the company in 2015 before being fired. Amongst several allegations against Snap, he said that Evan Spiegel the CEO once criticized his suggestion of pursuing growth in specific international markets.

He also alleged that Spiegel told him Snapchat was for rich people, so he did not want expansion into poor nations such as Spain and India.

A company spokesperson said that Snapchat is an app for everyone. It is available across the globe through a free download. The allegations, added the spokesperson, had been written by a former employee who was disgruntled.

The spokesperson concluded by saying Snap was grateful for is Snapchat community not only in India but around the globe.

However, reports over the alleged comments spread like wildfire across India’s social media over the past weekend. It prompted angry posts on Twitter from a number of users who were outraged. Some called for people to delete the app from their smartphones.

Dozens of Snapchat users left reviews criticizing the app on the Apple App Store and Google Play. Snapchat did not remain quiet, the company retweeted posts from its official account on Twitter from users that pointed out Pompliano’s claims had been disputed.

Snap is not the only company that has come under fire across social media. Some users’ anger was directed at Snapdeal the online retailer in India prompting one of its founders to respond. He said the last thing he thought he would ever do would be making a statement that Snapdeal is not Snapchat.

Snap has only been a public company since early in March, and after an earlier boost in share price is now down over 15% from its $24 per share opening day price.

Last week, Snap agreed to unseal the complaint by Pompliano, which was filed in Superior Court in Los Angeles.

Snap attached a notice to court document that denies that executives at Snap committed any of the alleged comments.

Critical Analysis: Sema4 vs. Its Peers