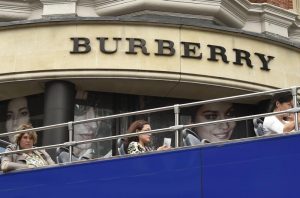 Burberry Group Plc the luxury retailer based in the UK posted quarterly sales that missed estimates by analysts as a sales decline continues to accelerate in its Americas region and dropping revenue for Hong Kong showed how tough a task incoming CEO Marco Gobetti is facing.

Retail revenue for the fourth quarter increased 2% related to comparable sales, said the company whose headquarters are in London. That amount was less than the estimated increase of 5%. Shares fell their most in the past six months upon the news.

Sluggish sales growth at Burberry shows not all of the companies in the luxury industry have felt the benefit of an increase in demand that buoyed LVMH the industry leader.

While brands like Gucci have done things to reinvigorate their brand and overhaul design, Burberry embarked on a campaign of cutting costs and cutting back on the different products they offer.

One analyst said that people failed to see a weak underlying business that has product that has failed to capture consumer’s imagination and is a bit stale when it comes to design.

Shares of Burberry were down over 7% in trading Wednesday morning in London, the biggest decline intraday since October of last year.

A weak quarter only adds to the many challenges Gobetti faces. The new CEO was the former head of the Celine label at LVMH and will succeed outgoing CEO Christopher Bailey in July.

Under the tutelage of Bailey, who will stay on as the creative director at Burberry, the company has seen stagnation in sales growth amidst drops in Asia and results that have worsened in its wholesale unit.

The Americas has seen deterioration in performance. The region represents over 25% of the group’s revenue and has become a big cause of concern amongst investors.

Sales in the Americas dropped by a percentage in the mid-single digits during the second six months of the fiscal year said Burberry.

The company has avoided stores in the U.S. that carry steep markdowns in an attempt to protect its image of luxury, while the strength of the dollar has encouraged people who are wealthy in the U.S. to go abroad and spend.

Like the majority of its luxury peers, the company experienced a rebound in its region of Asia-Pacific during the second six months, with China showing growth in the single digit percentage.