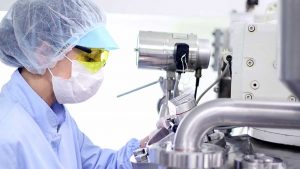 On Tuesday, Kite Pharma Inc. announced that CAR an experimental T-cell therapy that helps the body’s immune system to fight cancer, was very effective in the treating of aggressive non-Hodgkin’s lymphoma, as it met the main goal in a key study.

Shares of Kite flew up 15.85% following the announcement. CAR T-cell drugs are generated by genetically altering the own T-cells of a patient to add in a component of antibodies making them able to spot as well as kill cancerous cells better.

Many drug makers, including Novartis AG, BlueBird Bio Inc. and Juno Therapeutics are doing testing on CAR T-cell therapies, with each in a different stage of development and no dates are known when they would be completed.

Non-Hodgkin’s lymphoma takes place when the body is producing too many lymphocytes that are abnormal. The lymphocyte is a white blood cell. Symptoms of the sickness include fever, swollen lymph nodes, chest pain, night sweats and a loss of appetite.

In September, citing interim data from its mid-stage trial, Kite said the experimental therapy had been highly effective treating non-Hodgkin’s although two patients out of 62 in the trial had died.

On Tuesday, the pharmaceutical company said that the primary analysis included the full 101 patients in the trial and that no additional deaths occurred because of adverse events.

A market analyst said that data looked very good as it was above expectations, which demonstrate a strong risk to benefit efficacy profile and should support a rapid approval by the FDA possibly before the end of 2017.

Kite announced that it was planning to submit with European regulators a marketing application for its therapy sometime later this year.

One industry analyst said he expected that there would be an accelerated approval for Kite’s therapy from the United State Food and Drug Administration.

Bluebird’s treatment, being developed with Celgene, induced remission for a number of its patients that suffered from multiple myeloma with no worrisome adverse effects in its small study.

However, last November, Juno said that five patients with leukemia had died because of severe swelling of the brain raising concerns over its experimental therapy.

An analyst in Europe said the results were incrementally positive for the CAR-T category for Juno as a number of investors questioned the CAR T-cell therapy’s ability to generate remission in lymphoma.