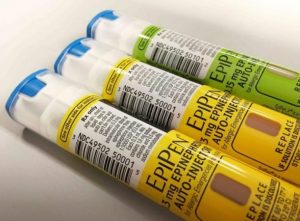 Mylan will release a new generic version of its EpiPen the emergency treatment for allergies at half the price that the original branded version costs. The price of the original has drawn much scorn from parents across the country and spawned inquiries by Congress members.

The potential savings in cost will depend upon the insurance coverage of the patients and the qualification for assistance and discount programs that will be provided by the drug maker.

For the company, the benefit from the long anticipated generic version is more specific: It should generate revenue in the millions of dollars while at the same time protecting the market share of the pharmaceutical company against its competitors.

Mylan NV announced Friday it would charge for its generic version of the EpiPen $300, which is a two-pack. The new generic version will start to reach retail pharmacies sometime next week.

The EpiPen list price for its two-pack unit, which schools and parents with children that have severe allergies keep in stock, now costs over $600, which represents over a 500% increase since 2007, when the rights to the drug were obtained by Mylan.

The EpiPen is used for emergencies to stop the potentially fatal anaphylaxis an allergic reaction to stings, insect bites and foods such as eggs and nuts.

People normally have a number of the EpiPens on hand at home, school or the workplace. However, the syringes, prefilled with epinephrine, a hormone, expire in a year.

Criticism of Mylan’s branded drug list prices started to snowball during this past summer when parents doing their shopping for back to school were hit with sticker shock at pharmacies and started to protest to their politicians as well as via social media.

During September, a panel of members of Congress questioned CEO of Mylan Heather Bresch about the surge in price of the EpiPen, which she has said was caused partly by pharmacy benefits managers, insurers as well as others that act as middlemen standing between Mylan and the final customer.

Mylan expanded its financial aid that the company offers customers who purchase EpiPen since the criticism grew over its pricing, but it has not budged on lowering the price of the drug.

It said during August it would double the limit for eligibility for it assistance program for patients, so a family that earns $97,200 with four people would not pay any out of pocket monies for the EpiPen.

A spokesperson for the company confirmed on Friday that the assistance program would also apply for its new generic version.