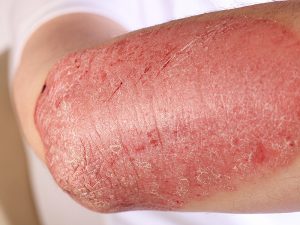 The experimental drug from Johnson & Johnson for psoriasis met its major goals as well as beat a rival in a final stage study related to psoriasis. That has positioned J&J to grow its line-up of immune-disease medications.

The drug, known as guselkumab, was able to clear or almost clear skin of just over 81% of the patients treated after a period of 48 weeks, said the company on Saturday during its research findings summary.

That was in comparison to a rate of 55% amongst those who used Humira, from AbbVie, said officials from J&J.

Stelara, J&J’s medication that was its second best seller in 2015, is approved already to use on psoriasis, which produces itchy and scaly skin.

Remicade, its best selling therapy competes directly with Humira for treating more than one condition that includes psoriasis. As less expensive versions of Remicade known as biosimilars become closer to entering the industry, J&J is searching for new medications to treat the different immune disorders.

Remicade and Humira function by reducing the activity of tumor necrosis factor, a protein that pushes inflammation, which is an immune process in psoriasis as well as other diseases that overreacts.

Both of the drugs treat a number of autoimmune disorders that include but are not limited to Crohn’s disease and rheumatoid arthritis.

J&J’s Guselkumab targets interleukin-23 protein, which is involved more specifically with the immune responses of the skin.

In the just ended study, which involved 837 patients, over 4.9% of those that used guselkumab had serious side effects, while only 4.5% of them using Humira suffered the same after treatment for 48 weeks.

A single patient from each of the groups had a heart attack, while two patients using guselkumab had developed cancer, with one contracting breast cancer while the other prostate cancer.

Those figures were in comparison to 9 patients who took Humira. However, one researcher said that cancers can be common and did not think they had been drug related.

On Saturday, the data was presented at a healthcare congress being held in Vienna.