Shares of Staples Fall After Earnings Come Up Short 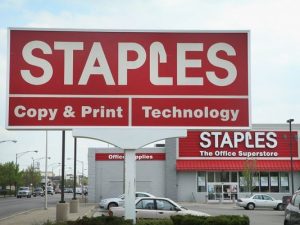 Office supplies retailer Staples saw its shares drop on Thursday after posting a continued drop in sales of its traditional supplies such as printer ink and paper helping drag the company to a loss during its most recently ended quarter.

For the quarter, that ended January 31, Staples posted total sales of $4.6 billion which were 3% less that for the same period one year ago. The company posted a net loss from its continued operations of $615 million equal to 94 cents per share.

Analysts were expecting Staples to have a profit of 25 cents a share, with net income reaching $165.4 million on sales of over $5 billion.

Staples has shrunk its operations the last year, even as it ended its efforts of merging with Office Depot its biggest rival when the deal was blocked by a U.S. judge.

During its 2016 fourth quarter, Staples sold its UK retail business and entered into a deal to sell the controlling interest in the remaining operations it has in Europe, which gave it an loss after tax of $1 billion from its discontinued operations for the full 2016 year.

Comparable sales, which are an important industry metric, dropped by close to 1% for the entire business, said Staples officials.

Although the retail division was hit harder, where comparable sales dropped by 8%, compared to a 1% increase in its delivery sales compared to the same period one year ago.

Staples shares were down Thursday by up to 6.8% before gaining at the close to end down 4%. During the last 12 months, shares have dropped close to 10%, which is in line with a fall of 10.6% for its rival Office Depot during the same time.

Staples announced as well that it will shutter as many as 70 of its stores across North America.  The company is shifting toward its business services and moving away from its brick and mortar stores.

These latest closings of stores come following 48 closures in 2016 and over 242 during the past three years. As of the beginning of its ongoing fiscal year, Staples U.S. store count was 1,255 and its Canada store count was 304. The retailer has some stores in markets besides the U.S. and Canada.

Staples continues to build its business contracts as well as increase its e-commerce presence. It is one of the leaders in drive by and pickup as well as delivery and is relying less on its retail locations for everyday consumers which is dwindling.