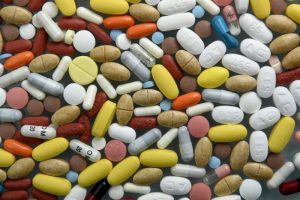 On Tuesday President Donald Trump reappeared in the debate over prices of drugs and sent pharmaceutical stocks plunging again thanks to a tweet that promised medication costs would be lowered for Americans.

Trump tweeted that he was working on a system where the drug industry will once again have competition.

Mylan NV, which makes EpiPen the allergy shot that has been the center of public outrage related to drug prices, was down 1.6%, while Perrigo fell 1.8% and Allergan was down 1.1%.

Trump tweeted early Tuesday after Republicans in the House unveiled their legislation to repeal then replace Obamacare or the Affordable Care Act late on Monday, which Trump touted as well, adding that there would be competition to come during the rollout of the new healthcare.

An analyst said the industry was intrigued at how Trump timed his tweet on Tuesday as it appeared quite rapidly after the healthcare bill from the House was unveiled. He added that he believes the tweet shows a continued interest on the part of the administration related to drug pricing.

The S&P 500 Pharmaceutical, Biotechnology and Life Sciences Index with 25 members was down by 1.3%, which is the most since January 11, when the president-elect Trump said members of the pharmaceutical industry were “getting away with murder.”

Trump has promised on multiple occasions to lower the cost of drugs and threatened to use the buying power of the government to force down prices, but to date has not produced any specifics related to how he will accomplish that.

The tweet on Tuesday left some analysts trying to determine what was meant by the President’s tweet, especially due to Trump alluding to bidding in previously tweets.

Unlike most nations around the world, the U.S. does not regulate prices of medicine in a direct manner, and makers of drugs have resisted it in a big way.

There is competition already between branded and generic drugs, which also have intense pricing wars amongst themselves, said one Wall Street analyst.

Medicare Part D, which is the prescription drug arm of the government’s program for elderly citizens, already has multiple tiers with branded medications that are interchangeable that means they compete against one another, said the analyst.

However, for Medicare Part B that is not how it works. Part B covers visits to doctors, lab tests and outpatient treatments.