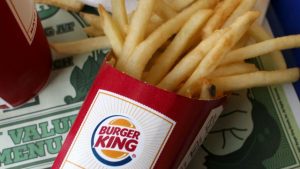 Despite getting a boost in sales from unique new products such as Mac ‘N Cheetos and Chicken Rings, Restaurant Brands International saw its sales in same stores come up short of expectations by analysts.

Shares of the parent company of Burger King were unchanged during early premarket trading on Wall Street.

Restaurant Brands International posted positive sale growth for same stores for the seventh straight quarter, with those at Burger King higher by 0.6% and those at Tim Hortons showing a growth of just over 2.7% for the three-month period.

Nevertheless, both of the top chains for the company came up short of forecasts by analysts according to the financial posted on Thursday.

Burger King had been expected by Wall Street to post sales growth at same stores of more than 2.2%, while Tim Hortons, the coffee house restaurant chain that is predominantly in Canada was projected to see growth of over 3.5%.

The company said that soft sales across both Canada and the United States was the biggest reason for the lower than had been expected sales growth in same stores for Burger King.

CEO Schwartz said that the company had ended its second quarter with strong sales growth system wide that were driven by the growth of its restaurant global footprint and the new and compelling product launches.

He continued by staying the company continues to achieve solid earnings growth versus results from prior years and believes the execution of strategies that are brand specific by the franchisees  and their employees will help to drive sustainable value for the future.

Shares of the company have increased by close to 20% since the start of 2016.

Burger King and Tim Hortons are going through a period of intense competition for breakfast across the restaurant industry.

More and more restaurants including fast food establishments such as Taco Bell have opened their doors for breakfast making in harder and harder to sustain sales for that period of the day.