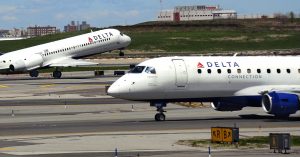 Delta Air Lines posted profit for the second quarter that beat Wall Street expectations despite revenue that was lower. The company is planning to limit growth in an attempt to push its fares higher.

Lower prices of fuel have been helping airlines earn large profits. The trend continued for Delta, which announced on Thursday that its net income for its quarter that ended in June reached $1.55 billion, which is up by 4% compared to the same period last year.

However, airline shares have dropped in 2016. Delta shares started Thursday 22% down for 2016, due to investors being skittish about an extended slump in revenue per mile.

The unit revenue has slid for over a year due to less expensive fuel encouraging airlines to increase flights as well as seats faster than there is demand, leading to average ticket prices being lower. The unit revenue at Delta fell by close to 5% during the just ended second quarter.

At the same time, oil prices increased since touching lows from over a decade ago during February. While fuel is still far cheaper than two years ago, the CEO Delta Ed Bastian said savings year to year from dropping prices of fuel are now for the most part in the past.

Due to that, Bastian has announced through a statement that was issued with Delta’s earnings report, that it was important to achieve the company’s financial targets over the long-term, which will be helped by getting the unit revenues back to their positive trajectory.

One step that heads in that direction is that Delta is only growing passenger carrying capacity by 1% during its fourth quarter, half of an increase that it was planning.

Delta will cut flying that is planned from the U.S. and UK by 6%, which is surprisingly large.

That is an important route for business travel and Delta has said it was going to scale back that in reaction to the soft fares as well as the British pound dropping.

Delta in the second quarter said that excluding one-off items adjusted profit at the airline reached $1.47 a share. Analysts were predicting $1.42.

Delta stock dropped 17 cents in trading before the opening bell. It shares have dropped by over 9% the last year.