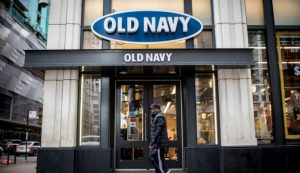 Gap has reported another drop in sales for the fifth consecutive quarter because of weak demand for its Old Navy and Banana Republic brands the clothing retailer is having problems wooing back its former shoppers that were lost to the fast fashion retailers.

Shares of Gap were down 12% in Monday extended trading as the business also estimated that its profit for the first quarter would be below market estimates.

Gap has been struggling the last few quarters due to a number of fashion misses that turned off its shoppers amidst the greater competition from retailers like Forever 21, Zara and H&M.

The CEO of an online research firm said the quarter was disastrous for Gap and one in which all it best engines became stalled out and actually moved in reverse.

While its sales across the lines in Gap  and Banana Republic brands have fallen, recent drops in sales of Old Navy create a far bigger challenge for the retailer in its 47th year.

While the brand Old Navy has been the group’s shining star for a number of quarters, the past couple of collections were both uninspiring and dull said the analyst.

Gap has been focused on turning its Banana Republic and Gap brands around over the last year by changing the assortment as well as through offering clothes that are trendier.

Art Peck the CEO of Gap said that the industry was evolving and the company needs to transform at a pace that is much faster.

On Monday, the company announced that it was evaluating its Old Navy and Banana Republic stores primarily those that are outside both China and North America.

Gap estimated profit per share would be 31 to 32 cents for its first quarter, while Wall Street was expecting profit as high as 44 cents a share.

Banana Republic comparable sales were down 11% while the same at its brand Old Navy were down 6%. Sales at its Gap brand were lower by 3%.

Sales overall at its established stores were down 5% during the quarter that ended on April 30. Analysts were expecting a drop of 2.6%, said an online research firm.

Net sales were down 6% to end the quarter at $3.43 billion, which missed the estimate on Wall Street of just over $3.54 billion.

The company is reporting its earnings for the first quarter following the close of the markets May 19.