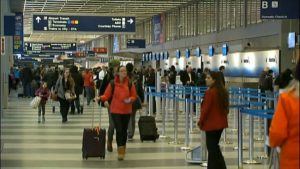 Two teenagers who were dressed in leggings were not allowed to board a flight one United Airlines Sunday due to breaking the dress code the airline has for travelers with special passes, said a spokesperson for the airline.

The two teen girls, who had been traveling with another companion, would not have been banned from boarding for wearing leggings if they had been paying passengers, said a spokesperson for United as the U.S. based airline tried to respond to a huge backlash on social media.

The girls were told they could not board their flight until they had made changes to their clothing. The airline said the two girls accepted what they were told and understood.

The spokesperson said the two and their companion missed their flight and it was not known if the three flew on a later plane or made other travel arrangements.

Though those three passengers made no complaints about how they were treated, another passenger Shannon Watts, who heard the discussion between the girls and the airline employees, set off a huge amount of criticism across social media with tweets that described the policy as targeting women unfairly.

Watts wrote that the airline’s behavior was sexist and it sexualizes young females, and the families were inconvenienced and mortified.

United pass travelers typically are employees of the company, family members of an employee or friends.

The tweets by Watts and the defense made by United of them touched a nerve for many females who had made leggings an important part of their wardrobes.

Popularity of leggings sparked criticism that they were called inappropriate attire in certain circumstances. There are schools that have barred female students from wearing leggings in class.

Outrage against United’s policy could be seen across the different platforms of social media as well as criticism for the response it gave to the initial criticism it received.

Chrissy Teigen a model tweeted that she has flown on United wearing just a top as her dress.

United released a statement that said leggings are welcome, and then explained its pass holder’s policy in much more detail.

That same policy bars any attire revealing undergarments, midriff baring tops or attire designated as swimwear or sleepwear such as mini-skirts or shorts that are above the knee.

The United spokesperson said that in an initial response, the airline could have explained the situation better.