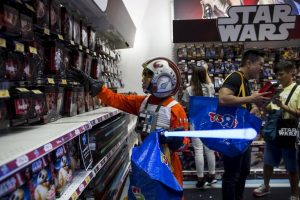 On Thursday, Walt Disney Co posted fourth quarter fiscal net income that increased by 10%, as its gains in the movie business and fewer taxes offset dropping revenue at its consumer products and cable networks units.

Net income during the quarter reached $1.8 billion, which was up from one year ago of $1.6 billion.

Per share earnings, after making adjustments for certain items reached $1.10, which came up short of the estimated $1.16 by Wall Street analysts.

Revenue was down 3% ending the quarter at just over $13.1 billion.

Fiscal 2016 resulted in the sixth straight year with record results, which were highlighted by the Shanghai Disney Resort opening, the huge success of Star Wars and the record shattering box office take by the Studio of $7.5 billion, said Robert Iger the CEO and Chairman of Disney.

Revenue pressure from its media networks, the largest unit at Disney that operates ABC, ESPN and the Disney Channels, continued during the quarter.

Revenue, comprising of mostly fees for content licensing by pay-TV businesses and advertising sales was down 3% to end the quarter at $5.7 billion.

Much of the troubles in the unit were in its cable networks. Sports network ESPN continued to suffer from high costs of production and falling television ratings as more people elect to cut cable subscriptions.

Cable networks’ revenue dropped by 7% to end the quarter at $3.95 billion. Advertising sales as well as affiliate revenue were down for ESPN due to it paying more to win the rights to televise the Olympics, the Hockey World Cup and different college sports.

Ratings at ESPN have been worrisome for the company for a number of months. There has been talk that ESPN might be spun off from Disney and that would give ESPN an owner and distributor in the U.S. to protect it.

During a call with analysts, Iger mentioned that he is bullish on ESPN despite the sluggish ratings. ESPN’s availability for cable companies that are using skinny packages and its own streaming options, in particular for mobile devices, could help to retain as well as bring younger viewers back into the fold, he added.

The broadcasting unit of the business, in which ABC is included, posted a gain of 8% in revenue to end the quarter at $1.7 billion as distributors of pay-TV paid more fees.

Revenue at its parks and resort arms increased 1% to end the quarter at $4.4 billion.