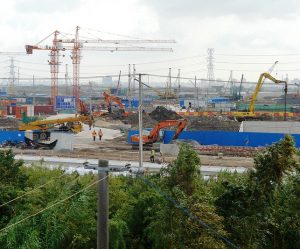 One of the richest men in China vowed that he would crush the big plans Disney has to build a massive new resort in China.

Wang Jianlin, an entertainment and real estate billionaire mogul said his company would look to prevent the theme park world leader from enjoying profitability in China during the upcoming 10 to 20 years.

Dalian Wanda Group, owned and operated by Wang has an arm that builds theme parks. Wang is not in the welcoming mood for the new Disneyland being launched that cost $5 billion.

The new park that is in Shanghai is scheduled to open for the first time in June.

Wang, while speaking on Chinese national television Sunday, said that Disney should not have opened a park in China. It added that he did not feel that the park’s financial prospects looked that good to him.

He added that the climate in Shanghai did not suit a theme park that was outdoors, suggesting that Disney would need to charge high prices for its tickets and that would risk losing customers.

A Disney spokesperson would not comment on the remarks made by Wang saying they were not worth of any response. The spokesperson said that Disney Chief Executive Officer Bob Iger had met with China’s President Xi Jinping two weeks ago in Beijing.

Disney has discussed the possibility of building a theme park in Shanghai since during the mid 2000s. This latest version of its project was originally scheduled to open in the latter half of 2015, but problems with construction and changes in design pushed that date back.

The park is full of exciting rides and features from storytelling to design that Disney is hoping will be appealing to the people of China.

The traditional Shanghai Skikumen-style architecture is highlight throughout the park as well as theme from the much respected Chinese zodiac.

Disney currently has one of its theme parks located in Hong Kong.

Disney theme parks as well as resorts generated over $16 billion of revenue in 2015 for the company, which made them the second largest business the company behind just television.

However, Wang, whose recent acquisitions in the entertainment industry include Legendary Entertainment the Hollywood studio, says that his company contains the scale within China that can make life very difficult for Disney.

He added that the company has a strategy that – “One tiger cannot compete against an entire pack of wolves.” He concluded by saying that Shanghai has a Disney park but Wanda has between 15 and 20 theme parks scattered across China.

Head to Head Analysis: Warner Music Group vs. Its Rivals