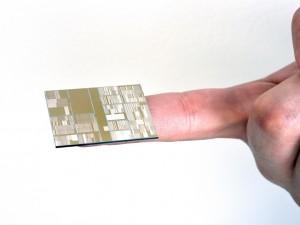 IBM, the tech behemoth announced it developed a new microchip to be used in computers that is four times stronger than ones currently on the market.

The firm said on Thursday that it manufactured the chips with its components that were only 7 nanometers wide, which is 1,000 times smaller than red blood cells.

Each generation of new chips is defined by smaller sizes of its components. IBM manufactured the first chips in a lab setting and currently is exploring new ways for them to be produced in a factory setting.

The company said these new advances would enable the company to produce chips that contain more than 20 billion transistors (switches) compared to 1.9 billion on Intel’s most advanced chips that are 14 nanometers in size.

IBM is making a hard push to reduce its size of transistors and other components on its chips, which are the size of fingernails, following the trend of ratcheting up computer power.

This is known as Moore’s Law, which is named after Gordon Moore, one of the first pioneers in building silicon chips and the Intel co-founder. It holds that over the long history of computing hardware, the amount of transistors in densely integrated circuits has doubled about every two years.

IBM’s announcement on Thursday means that the exponential increase of the past in computational power would continue for a few years.

IBM and partners including Samsung are going to invest more than $3 billion in a new manufacturing plant in New York to produce the new tiny chips that are only seven nanometers in size. They will be made available to be installed in computers as well as other tech type devices by 2017.