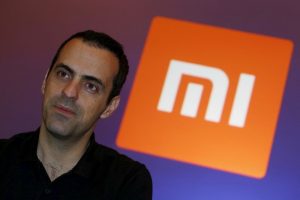 Hugo Barra is returning to Silicon Valley. The international chief at Chinese smartphone maker Xiaomi stepped down following a turbulent run of four years that saw the company rise to the top of its China phone market prior to local rivals mimicking its model and surging past it.

Barra is a former executive with Google and will return to Silicon Valley after being hired away buy Xiaomi during 2013 to represent the company at a global level.

On Monday, in a post on his Facebook, Barra announced that it was the right time for him to return home and embark on another new adventure. He did not elaborate on what his new adventure would be.

After the departure in February of Barra, the global operations for Xiaomi will be overseen by Xiang Wang a senior vice president. Wang will take his new position following the Lunar New Year holiday.

Xiaomi handed the task of taking the company global to Barra. The tech guru was able to help the company enter India, where it sales in 2016 exceeded $1 billion.

Xiaomi during Barra’s tenure held the spot as China No. 1 smartphone vendor for a brief period by stuffing high-end components inside cheap devices and creating a huge online following of users.

However, other local brands like Vivo, Oppo and Huawei quickly copied Xiaomi’s moves and created more innovative tactics to take away sales.

An analyst in China said Barra was an important part of Xiaomi during his early days there due to helping with the oversea markets.

The analyst said that the departure of Barra will likely have a very limited impact on the company due a stabilizing of its position in India and now the task there will focus on increasing its market share.

Barra’s exit might indicate Xiaomi will be refocusing on its market in China, said another smartphone analyst in Hong Kong. Barra will leave a city, Beijing that is infamous for its air pollution, as Xiaomi is struggling in its own backyard.

Barra said that he realized that living in a singular environment the past few years has affected his life and started to affect his health.

Xiaomi in 2014 was valued at over $45 billion, which made it one of the biggest startups in the world drawing comparison with Apple after doubling its revenue in 2014 and reaching the top of the smartphone market in China.

Critical Analysis: Sema4 vs. Its Peers