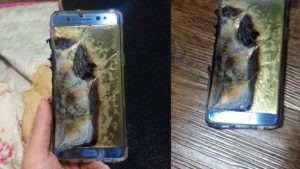 South Korea based Samsung Electronics has seen a revival in its mobile sector of late, but all of that was thrown into great doubt as the tech titan stopped all shipments in South Korea of its new  smartphone the Galaxy Note 7.

Investors dragged down the market capitalization of the company by $4 billion on Thursday after the company confirmed late on Wednesday the delay in shipping of its waterproof, larger-screen Galaxy Note 7, which was not been in the market for even two weeks.

A spokesperson for Samsung said he could not say if the delay also applied to outside South Korea. He would not elaborate why the smartphone was delayed other than saying they were doing additional testing.

Yonhap the national news agency earlier reported about five claims worldwide of the new smartphone Galaxy Note 7 catching fire or exploding while it was charging.

Certain social media sites showed videos and photos of the scorched smartphones, although none were verified. No comment was made by Samsung about those videos or photos.

Carriers in South Korea including SK Telecom and KT Corp confirmed that shipments they were expecting were delayed.

On Thursday, a government watchdog for consumer safety in Korean requested additional information from the electronics giants on the incidents. An official from the agency said that Samsung had not yet responded to their request.

The biggest maker of smartphones in the world by number of shipments has relied on its line of new Galaxy products to driver its recovery in its mobile handset business, which had been struggling for over two years amidst stronger competition from its biggest rival Apple and a number of rivals in China.

The Galaxy Note 7 with a large screen, which has received numerous positive reviews appeared on sale for the first time on August 19 in South Korea, prior to the planned unveiling in early September of the next-generation iPhone from Apple.

The smaller Galaxy S7 flagship smartphone has had strong sales that helped make its June ending quarter the most profitable at Samsung in close to two years.

The profit margin of 16% in the mobile business was its highest in two years as well.

On Thursday, shares of Samsung ended down 2% for the full day and were off 3.2% from last month’s record high.

Other shares of the Samsung Group also were down. Samsung SDI, a supplier of batteries for smartphones made by Samsung, was down over 6%. The company announced it was investigating the reported incidents with Samsung Electronics.