Strong Dollar Will Cost Apple and Others Sales Following Brexit 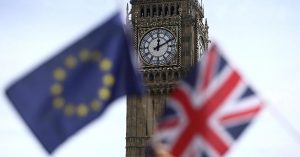 Investors should be getting ready to listen to more negative impact of foreign exchange of currency on financial results from large tech companies in the U.S.

That is due to the U.S. dollar strengthening which started over a year ago on the fears of problems in the economy in China. It will accelerate now because of the decision by voters in the UK to exit the European Union.

If what has happened of recent is any indication, the currency moves driven by Brexit will likely take their toll on tech giants such as Apple, Facebook, Microsoft, Alphabet and Oracle to the tune of hundreds of millions of dollars in revenue for the quarter.

All of the companies have large operations overseas and late in 2015, as the dollar was moving higher, they started sharing a new metric financially with investors.

While the wording is not exact and differed amongst the companies, it is a measure of revenue excluding the impact from swings in foreign currency.

That impact is quite considerable, based on looking through the latest financial results, SEC documents and transcripts from earnings calls.

Apple took the biggest hit, as Tim Cook its CEO close to the beginning of his comments on the company’s earnings call in April said continued currency weakness was seen in most of the international markets in which they operate.

On a constant currency basis, revenue was down 9% from the previous year, 400 basis point under the reported 13% decline.

That equates to a currency impact of approximately $2.3 billion.

Also slammed by the currency moves was Microsoft during the first quarter of 2016. It reported a constant currency impact to its revenue of over $838 million.

The impact to its income was over $443 million equal to 6 cents per share.

Along with biting into the revenue, expenses overseas were cut due to contractors and employees in foreign areas being paid in the local currencies.

However, the impact overall is much more negative than positive and looks ready to worsen following the vote of the UK to leave the EU. All major technology stocks were between 2% and 4% lower on Friday amidst heavy trading.

Alphabet the parent company of Google said its currency effects during the first quarter were $593 million, which cut the top line growth of the company from 23% to 17% year over year.

The British pound weakening lowered the revenue of Alphabet by $87 million and on Friday the pound was down by up to 10%.