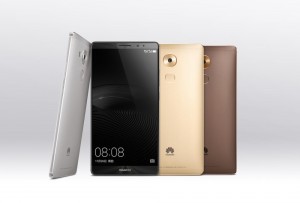 Huawei has launched the Mate 8 its flagship phablet the new 6-inch device is a sleek, fast, good value, great battery life phablet with the most up to date Android version available.

The release for other countries besides China will likely be during the first three months of 2016, but one can be purchased now in China for a starting price of $470.

The Mate 8 specs are a big departure from both the Mate 7 and Mate S, except for the 6” screen and the large battery that is 4000mAh.

Huawei has promised that this new Mate 8 will have a battery life 30% longer than that of the Mate 7.

The device has three types of configurations. First is a RAM of 3GB that has 32GB of storage that is NAND or a RAM of 4GB with storage of either 64GB or up to 128GB.

The Mate 8 is the first new electronic handset that has shipped other than the latest Nexus from Google that runs on the new Marshmallow from Android.

As its flagship Phablet, Huawei has given the Mate 8 an expensive feel and look, boasting a body made of aluminum and 83% ratio of screen to body. It comes with a fingerprint sensor in the back side, a main camera of 16 megapixels and a selfie shooter of 8 megapixels. Its display is full HD with a 368 pixels per inch screen density.

More info about the release of Mate 8 internationally will be released in January.

The outer design features a soft, rounded anodized back made from aerospace aluminum.

One of its most exciting features is the Kirin 950 processor with early benchmarks suggesting it will give both the Samsung Exynos and Snapdragon 820 a good run for their money.

It will come in four colors including Moonlight Silver, Champaign Gold, Space Gray and Mocha Brown.