Merck Posts Rise in Both Revenue and Profit 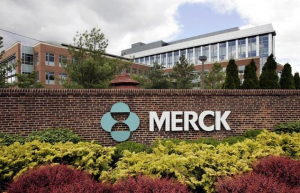 Merck & Co posted an increase in both its revenue as well as profit as its closely watched treatment for cancer and its vaccines boosted its results. Shares were up 2.5% during trading before the bell as the company’s results beat expectations on Wall Street.

Pharmaceutical revenue during the third quarter was up 5.8% ending at $9.44 billion, boosted from growth in its cardiovascular drugs, oncology, vaccines and acute care in hospitals.

Keytruda a drug for cancer posted $356 million in sales during the just ended quarter, in comparison to $159 million for the same quarter one year ago.

On Monday, the drug was given an approval by the U.S. Food and Drug Administration as a first line treatment for certain patients with lung cancer, which is a huge win for the treatment as typically it is a secondary treatment.

Merck continues to develop as well as launch drugs for many types of cancers, and its program of development includes over 30 tumor types as well as 360 different clinical trials.

In January, the FDA approved Zepatier a new treatment from Merck for hepatitis C. This is the most recent entrant into a growing market for treatments used for the viral infection. The market currently is dominated by Gilead Sciences.

Sales of its vaccines were up during the three-month period. Gardasil as well as Gardasil 9, both treatments for HPV were up 38% ending the quarter at $860 million amidst price increases and demand across the U.S.

Sales of its measles, mumps, varicella and rubella virus vaccine proquad were up 27% as the Center for Disease Control purchased the drug for its vaccine stockpile for pediatrics.

Remicade, an inflammatory disease treatment, saw sales drop by 30% due to competition from European biosimilar drugs.

Sales in its Animal Health segment were up 5% ending the quarter at $865 million boosted by bravecto its treatment for flea and ticks.

Costs of research and development were up by 11% to just over $1.7 billion in higher spending for clinical development.

For the complete quarter, Merck posted a $2.18 billion profit equal to 78 cents per share compared to last year during the same quarter of $1.83 billion equal to 64 cents per share.