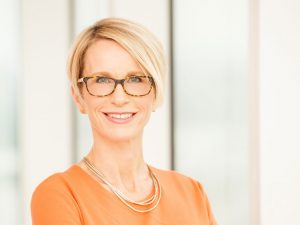 The recent appointment by GlaxoSmithKline of Emma Walmsley as CEO put her on a short list to become the highest profile female in corporate Britain.

Walmsley, who is 47, will take the post of CEO in 2017 when Andrew Witty the current CEO will step down March 31. With her move up the corporate ladder the FTSE 100, which is a list of the biggest blue chip companies in Britain by market capitalization, will have seven female CEOs.

However, GSK is far bigger than all of the other six, with a £80.2 billion or $104.6 billion market capitalization. That is in comparison with Imperial Brands market cap of £38 billion, which is second largest on the list.

In the United States, the Standard & Poor’s 100 index has 9 CEOs who are female at corporations that include General Motors, Lockheed Martin and Oracle, according to data taken from online nonprofit Catalyst.

Upper echelons of the big companies in Britain have become more diverse of late with many women sitting on boards of the 350 largest British publicly traded companies.

That number has more than double the past five years and in the FTSE 100 there no longer are any boards that are all male.

Philip Hampton, the Glaxo chairman along with Helen Alexander the UBM chair, earlier in 2016 was appointed by the government of the UK to chair a review on the amount of senior executives who are women at companies in the FTSE 350.

According to data online from CBI from the start of 2016 there are just 9 more executive directors who are female on the FTSE 350 boards than there were back in 2010.

While the chief executives who are female has remained flat, data from another research firm last year showed that if men and women were to participate equally in today’s workforce, the gross domestic product could increase $12 trillion equal to 11% before 2025.

Atour Lifestyle Now Covered by Analysts at Bank of America