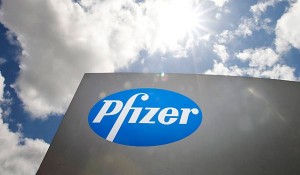 Pfizer Inc has reported earnings for the fourth quarter that beat estimates made by analysts  helped by Ibrance the new cancer treatment as well as the Prevnar vaccine.

Earnings reached 53 cents per share, said the company in a prepared statement on Tuesday, topping the estimates by analysts by 1 cent.

Its per share earnings forecast range was short of estimates.

The U.S. drug maker has worked to rebuild its former pipeline and favor with its investors, after a number of patent expirations on key products such as Lipitor and Celebrex, which have led to five straight years of sales declining.

The company agreed to a $160 billion industry record deal with Allergan, which will add revenue and might eventually allow Pfizer to split up into two companies that are smaller.

Net income at Pfizer was down 50% to end the quarter at $613 million equal to 10 cent per share, during the last quarter as compared to $1.23 billion equal to 19 cents per share from the same period one year ago.

Pfizer released a 2016 forecast that predicted that at the lower end sales and earnings would change very little.

Sales were predicted to be between $49 billion and $51 billion, while analysts are predicting $52.4 billion.

The U.S. drug makers also detailed its performance for the fourth quarter of its products.

Ibrance its cancer drug had sales of $315 million, which were in line with estimates. Sales of Prevnar the vaccine reached $1.86 billion while projections were at just $1.69 billion.

The acquisition by Pfizer of Allergan will lessen its tax base and give it a dermatology products portfolio such as Botox and drugs for the stomach like Linzes.

This acquisition has sparked some controversy politically since it would move the tax address for the company to Ireland. CEO of Pfizer Ian Read said that the deal, which is still pending is expected to be completed before the end of this year.