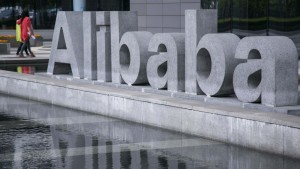 It took just half the time for Jack Ma this year to sell what was sold last year with his online sites.

Transactions through the Alibaba Group Holding during the once a year Singles Day shopping event surpassed 57.2 billion yuan or $9 billion prior to midday which eclipsed the record set last year with over 12 hours remaining in the event.

At 9:30 Beijing time, the total has reached 81.2 billion yuan. The items that led the way include nutritional products, baby related items, Nike sneakers and jeans with Levi’s leading the way.

Ma increased the stakes with the event this year by moving it to Beijing, attracting more foreign products and celebrities from Hollywood such as Kevin Spacey and Daniel Craig to add more glamour to the event.

Tapping into the rising disposable incomes in China has paid nice dividends for the biggest e-commerce company in China as it is capturing more of the surging smartphone usage in the country with video streaming and restaurant deliveries.

Consumers in China have a great deal of extra money on their hands, said one analyst in China, and online retailers are customizing products to serve the savvy urban Chinese consumers he added.

Alibaba’s figures arrive at a time when retail sales in China have accelerated during October, overcoming the countries slowed growth in the economy in the past 25 years.

Retail sales were up 11%, which was the quickest increase in the year and beating projections of analysts. As the leaders of the nation, seek to create a re-balancing of the economy towards services and consumption.

Ma started the event with a variety show of four hours that included Adam Lambert a finalist on American Idol and an appearance by James Bond star Craig and Spacey from Netflix original House of Cards.

Alibaba has estimated that 1.7 million deliverymen, over 400,000 vehicles and more than 200 airplanes are to be deployed for the delivery of the packages for everything sold from underwear to iPhones.