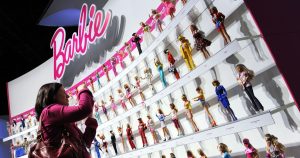 Mattel posted a drop in sales for the first quarter that was more than was expected, as U.S. as well as some retailers in Europe were left with too much inventory following a holiday shopping season that was muted.

New CEO Margo Georgiadis said the company viewed its results for the first quarter as disappointing and was not reflective of what can be delivered by Mattel.

Georgiadis has been the CEO since February after running the commercial operations for Google in the United States.

Mattel addressed the majority of its inventory issues but work to lower the bloated inventory left over from the holiday shopping season did not go as fast as had been expected.

Mattel’s dip in its net sales dropped by a more than an expected 15% ending the quarter at $735.5 million while the loss per share was 32 cents. Analysts on Wall Street were expecting sales of $790.4 million a loss per share of 18 cents.

Stock at Mattel was down 6.5% in trading after hours following the release of the quarterly results. Declines in sales were broad based across several of the core brands at Mattel.

Sales for Fisher-Price were down 9% while sales dropped by 38% for the art & crafts and construction brands. Its wheels category that encompasses the ever-popular Hot Wheels brand, ended up as the only bright spot with an increase in revenue of 4%.

The gross sales for its other girls brands dropped by 34%, but that was in part due to the loss of an important Disney Princess doll license which hurt revenue badly after being awarded to Hasbro the primary rival of Mattel.

While the new CEO said that the first three months was a difficult start to 2017, she was bullish about the remainder of the year.

The first quarter of each year is the lightest quarter for sales for all toy makers, which generates the majority of its sales near the last half of the year especially as the toy industry prepares its run up to the key holiday shopping season.

Beginning in the second quarter, the toy maker is expecting help from toys that it made to coincide with the Cars 3 release by Disney, which will hit theaters during that three-month period.

That particular property by itself could give a boost of $300 million to Mattel.

Mattel’s CEO said while the revenue trends for the first quarter had been disappointing, trends in stores were strong for the most popular Mattel brands.