Tesla Deliveries Set Record for One Quarter at 25,000 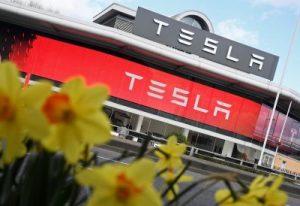 Tesla Inc., the U.S. electric car maker, announced on Sunday its vehicle deliveries for the first quarter had surged by 69% from the same period one year ago to set a record for one quarter of 25,000.

Tesla said out of all the vehicles that had been delivered, close to 13,450 were its Model S sedan and 11,550 were its SUV Model X.

During the fourth quarter of 2016, deliveries dropped 9.4% because of production hurdles faced over the short term from transitioning to new hardware for its autopilot.

Tesla said that challenges in production, which began the end of last October and ran through the early part of December, shifted productions of vehicles towards the end of its fourth quarter, which resulted in deliveries being delayed.

In the end, close to 2,750 vehicles ended up not being counted as fourth quarter deliveries either because of last minute delays due to transport or due to customers unable to take delivery.

As well as deliveries during the first quarter, another 4,650 vehicles had been in transit to Tesla customers upon the end of the three month period and will count as second quarter delivers, said the carmaker in a prepared statement on Sunday.

Vehicle production during the first quarter reached a new record for one quarter at 25,417.

Tesla CEO Elon Musk has repeatedly taken huge risks since 2010 when he took the company public, but investors were spooked in February when he announced that the carmaker could come near the edge as it eats up cash leading up to its crucial launch of the Model 3.

Tencent Holdings, based in China, acquired a stake of 5% in Tesla a week ago for over $1.78 billion, which provided the carmaker with an ally who has deep pockets as it nears its launch of the Model 3 to the mass market.

The high-volume, midsize sedan is scheduled to launch sales later in 2017 across the United States.

Tesla shares were higher at the close on Friday on Nasdaq and have surged by over 30% since the start of 2017.

The investment by Tencent Holdings has helped to quell any short term worries by investors thanks to the company injecting such a large amount of money into the business.