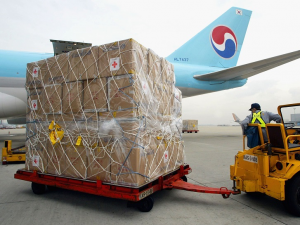 Amazon’s new investment, which could help to create over 2,000 new jobs, is just example of the company’s ambition to grow in logistics and shipping.

The largest e-retailer in the world is planning to build its first air cargo hub in Hebron, Kentucky at Cincinnati/Northern Kentucky Airport for $1.49 billion, said company officials on Tuesday.

The hub is scheduled to create as many as 2,700 jobs in the area. Amazon’s project will span 900 acres and would be the single largest investment ever by any business in northern Kentucky, said state officials.

In 2016, Amazon with two air carriers leased 40 cargo planes to help ship packages across the U.S. Sixteen of the same planes remain in services today, with others to be online in the near future. The cargo hub when complete will support the new aircraft by loading, unloading as well as sorting packages.

The hub shows how big the ambitions of Amazon have grown in hopes of remaining up with the huge number of packages that keep growing that it must deliver. Amazon also might have the ambition to one day complete with FedEx and UPS in shipping packages.

However, up to now, the company continues to say the partnerships it has with its shipping partners are very valuable and it anticipates that it’s expanding infrastructure for shipping as being supplement for FedEx, UPS and the U.S. Postal Service.

On Tuesday, state officials gave preliminary approval for a package of incentives of as much as $40 million across a period of 10 years for the project.

It is expected that the hub will begin construction in 2017 and it will take between 5 and 7 years to be completed. An official from Kentucky said the full amount of incentives would be available to Amazon if it meets with specific job creation, wage, and investment targets

The hub will add a great deal to the employment of Amazon in Kentucky, which includes currently 10,000 workers in 11 Amazon fulfillment centers. The news released by Amazon keeps up its plans of hiring many new workers in the United States.

In January, Amazon announced it would be hiring 100,000 new workers in the U.S. over the next year and a half.

As well as the just announced air cargo hub, the e-retailer bought 4,000 trailers to increase capacity for trucking. The worldwide logistics and shipping network of the company includes 20 centers for sorting and 148 fulfillment centers.