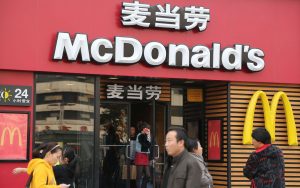 McDonald’s Corp is trying to raise between $1 billion and $2 billion through the sale of its Hong Kong and China stores after the fast food giant based in the U.S. decided it would keep as much as a 25% minority stake, said a person who has knowledge of company plans.

The company chose a consortium that is led by Carlyle Group LP a private equity business and CITIC Group Corp a conglomerate based in China to buy its stores and the decision to keep as much as 25% lowered the sale price from as much as $3 billion that was originally expected, said the source who would not be named.

McDonald’s said it wanted to have exposure to growth in the futures in the second largest economy in the world, which is the reason it made the decision to maintain such a large stake, said the source.

The company is also keeping for the time being, its stores that are located in South Korea, which previously it wanted to sell.

A spokesperson for McDonald’s located in Shanghai did not make a comment when requested. Carlyle did not comment nor did CITIC.

In March, McDonald’s said it would implement a reorganization of operations in Asia looking to gain strategic partners for its locations in Hong Kong, China and South Korea in its switch to a franchise model that includes less capital.

McDonald’s owns the majority of its over 2,800 locations in those three markets and is offering a franchise of 20 years to buyers with an extension option of 10 years.

The stores in Hong Kong and China received bids from a number of parties including a group led by TPG Capital Management and Wumart Stores an operator of mini-markets. Another bid came from Sanpower Group a real estate company that owns House of Fraser a department store in Britain.

This sale arrives at a time when operators of fast food chains including McDonald’s as well as Yum Brands are recovering from a number of scandals related to food supply in China that undermined performance.

Yum, which operators Taco Bell, KFC and Pizza Hut amongst other restaurant chains, agreed to the sale of a stake worth $460 million in its unit in China to Primavera Capital as well as an Alibaba Group affiliate prior to its planned spinoff of that business.