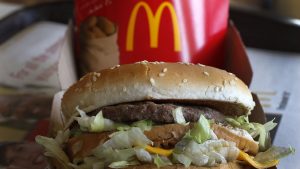 McDonald’s Corp has kept its turnaround on the right track during its most recent quarter despite an increase in competition across the U.S.

The burger chain was aided by its all-day breakfast, its McPick value promotions and its Chicken McNuggets containing simpler ingredients, said company officials on Friday.

U.S. restaurant sales at established locations increased 1.3% amidst softness across the industry that was partly blamed by executives on lower prices at the supermarket that helped to encouraged a certain number of diners to cook meals at home.

U.S. results, which represent close to 40% of the profit overall at McDonald’s, exceeded lowered expectations by analysts and were not as strong as the 2% sales gain at same stores in the U.S. that its rival Dunkin Brands posted on Thursday.

International restaurants were able to easily exceed expectations on sales growth at same stores in Australia, Britain, Germany and Canada.

Because of that, McDonald’s global sales at its restaurants opened a minimum of 13 months increased 3.5% during the quarter, which handily beat analyst estimates of 1.5%.

McDonald’s CEO Steve Easterbrook has vowed he would transform the chain  into a progressive, modern burger company. Easterbrook introduced a breakfast that is available all day, banned any use of antibiotics in chickens in the U.S. and has worked to increase the speed in serving customers and making the locations friendlier.

Shares at McDonald’s ended Friday 3% higher, despite warnings by analysts that same store sales in the U.S. for the fourth quarter  could drop by 2% because of the high bar that was set with the debut of its all day breakfast during October of 2015.

An industry analyst asked executives during a conference call about what will be coming next given the perception by many that the McPick and all day breakfast have started to run out of gas as drivers of sales across the U.S.

Easterbrook answered that international restaurants’ efforts of experience of the future including the use of mobile apps and digital kiosks could boost domestic operations.

The largest fast food chain in the world posted net income that was up 2.6% to end the quarter at $1.28 billion equal to $1.50 a share. The company has 9.2% fewer outstanding shares this year compared to last during the same period.