Big Mac Not Known by Many Millennials 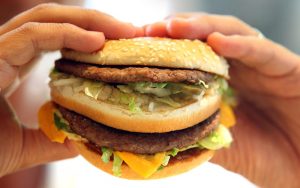 The Big Mac does not seem to be as big any longer. It is not about its size, but its popularity. One top franchisee with McDonald’s said in a memo, that was send to other franchisees during the summer, that the Big Mac is less relevant.

One out of every five millennials, which is the core customer of the fast food industry, has tried McDonald’s flagship product, said the memo. Sales for hamburgers at U.S. restaurants for McDonald’s have been flat over the last couple of years. Prior to that, it had a growth rate of only 1% to 2% each year, according to data from a former executive with the fast-food giant.

A panel has been put together by McDonald’s to help the burger chain refocus on flavor and McDonald’s will test the use of fresh rather than frozen beef, different techniques in cooking and a system of ordering for customized, made to order burgers.

CEO Steve Easterbrook who took the reins of the company in 2015 said McDonald’s is attempting new things as well as rethinking its legacy beliefs.

The challenges it has are clear. The burger chain gets close to 70% of its entire business in the U.S. through its drive through.

Burgers are usually prepared in advance and kept in warming cabinets in order for them to be ready when customers pull up at the order win.

McDonald’s announced that its goal of delivery time, from the moment the order is placed to when it gets delivered is only 90 seconds.

Even though the menu as McDonald’s has been broadened, burgers still represent close to 20% of the total sales of the chain of $8.61 billion last year in the U.S., said a former McDonald’s executive.

The burger chain is also testing a customizable burger menu in specific markets that allows diners to select their meat type, bun as well as toppings from a kiosk that is self-order, and then sit and wait for a McDonald’s employee to deliver their food. The different options include guacamole, bacon and grilled onion.

Franchisees have been complaining it does not make any sense to put focus on the table service when such large number of clients order at the drive through, and guests complain that it takes more time than they have to wait.