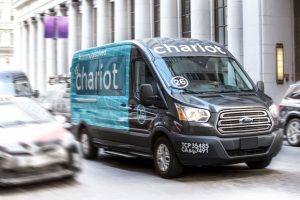 Late last week, Ford Motors acquired Chariot a startup shuttle van company in a deal that was all cash. However, the price at the time of the deal was not disclosed, so it was not certain if the deal had been for a distressed startup being sold for a bargain price or if Ford paid a market price for a business that fits into its long term strategic plans.

The automaker dished out $65 million for the company plus earn outs so employees who held stock options would be whole. The shuttle van startup raised just one round of funding of $3 million since 2015.

One person familiar with the startup said the deal was fair and investors were happy with its outcome.

Chariot offers commuters in the Bay Area another alternative to the areas overloaded and overburdened mass-transit system. The company uses 15-seat Ford Transit vans to serve routes that are crowd sourced, said a spokesperson from Ford.

At this time, the routes have been based upon demand from its riders, but following the acquisition by Ford, a set of data algorithms will be in charge of determining the routes, said the spokesperson from Ford.

CEO of Chariot Ali Vahabzadeh said previously that the deal with Ford had taken shape over a period of more about 18 months then recently it accelerated and closed quickly.

As well as the acquisition of Chariot, the first one of its kind by Ford Smart Mobility, the company’s unit for the future of transportation, the automaker announced it was collaborating with Motivate a service of bike sharing in the Bay Area, which will integrate its services into the FordPass app.

Users can then access transportation that is pedal powered through the GoBike features of Ford starting in 2018, when that service is scheduled to launch.

GM is also making a number of aggressive moves into the new transportation technology space with investments of $500 million in ride-hailing startup Lyft and purchasing Cruise, the startup specializing in autonomous cars, earlier this year.