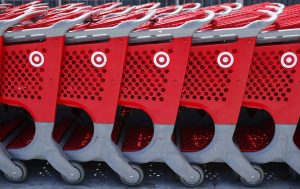 During the just ended quarter, Target Corp posted sales at same-stores that fell and the retailer is expecting more declines that will hamper its turnaround.

On Wednesday, Target Corp announced that its sales at its established locations were down for the first time in over two years while warning there would be additional declines, signs that the turnaround push by CEO Brian Cornell has now stalled.

Target lowered its profit target for the year and warned that sales at same-stores would remain flat or drop up to 2% for the current fiscal year.

Cornell said the biggest challenge for the retailer was traffic in the stores, which affected its sales across all of its categories of merchandise.

The CEO highlighted a drop in demand for electronics, especially for products made by Apple, for the majority of the weakness in the sales of that category. He added that sales of iPads and iPhones as well as other electronic gadgets were down over 20% for the quarter ending July 30.

Target officials said their grocery business, which represents 20% of its revenue, had disappointed during the quarter, as its sales were down despite attempts to improve fresh produce and to add even more organic products.

CFO Cathy Smith said the company is planning to increase its grocery promotions as well as marketing efforts, which have been focused for the most part on style products.

Target shares were down 6.5% in trading during Wednesday. Target had already warned that sales at its same-stores could fall as much as 2% during its second quarter. Wall Street analysts projected a decline of 0.9% and one year ago, sales climbed over 2.4% during the same period.

The drop in those sales is the first since Cornell took the position of CEO and is the worst since the beginning of 2014, when Target was attempting to recover from the breach of its computer systems that exposed consumer and credit card data of millions of people.

Cornell has worked to reinvigorate sales through focusing on categories of higher margin, shuffling the management and through cost cuts.

However, the report for the company’s quarter and its updated outlook for the remainder of the year, suggests the turnaround efforts of the CEO have started to lose steam, as many retailers in this spectrum have to deal with less foot traffic due to many consumers in the U.S. changing what they purchase as well as where they purchase it.